The scope of a variable determines where the variable can be used. The scope is broadly divided into two - global scope and local scope.

The global scope is the outermost scope in JavaScript. Any variable declared in global scope can be accessed anywhere.

The variable message is defined in global scope. We can access it anywhere in the document. Apart from the global scope, there are multiple local scopes.

A variabe declared in local scope can only be accessed inside that local scope. That includes any other (local) scope(s) defined inside it.

For the sake of understanding, we can categorize local scopes into 3 types: 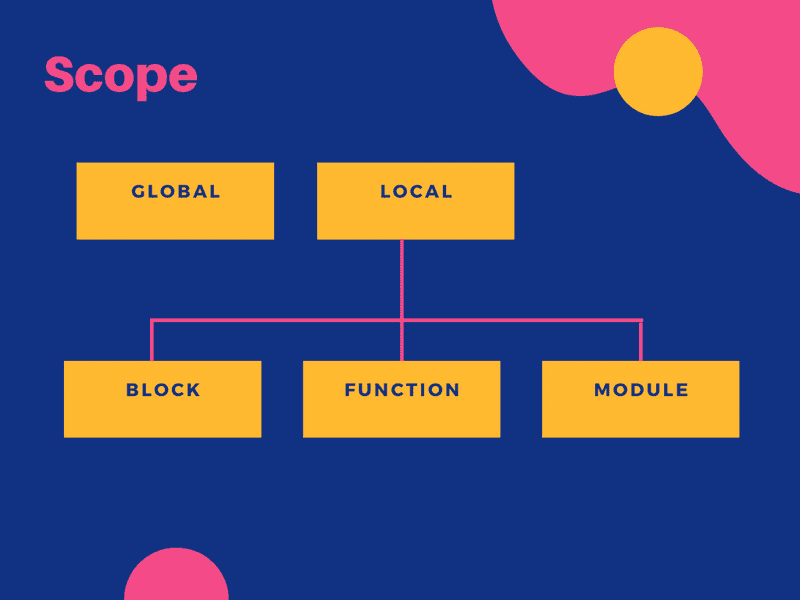 In JavaScript, a code block is defined using curly braces {}. Any variable declared inside is in block scope. This applies to if, for, and while statements

It should be noted that the block scope only applies to let and const. Anything declared using var will be in global scope.

We can create a block scoped variable by simply declaring it inside a code block too.

This way we can work with isolated pieces of codes and variables.

Any variable declared inside a function is in function scope. It works for var, let, and const.

Any variable intented to be used on multiple independent functions must be declared in global scope (or enclosing block scope).

With the introduction of ES6, modules are a reality. Any variable defined inside a module is within the module scope and cannot be used elsewhere.

The above module has defined constant g for internal usage.

However, we can use if the variable g is explicitly exported using the export keyword.

Scopes in JavaScript can be nested. This means variables declared in parent scope can be accessed inside children scope.

Technically, this is why a variable declared in global scope is accessible anywhere.

Lexical/static scoping means that a variable defined in outer function can be accessed by the inner function. This is because scope of the variable is statically determined.

Here variable p is defined inside outer(). However, it is also accessible inside inner() because of position of variable p. The variable is located in the outer()'s scope where the inner() is also defined. This is called lexical or static scoping.

In addition, introduction of ES6 module have brought in module scope. Now function scope along with block and module scope are all local scopes in JavaScript.

The introduction of let and const keywords are important because it allows us to repeat general variable names in block scope. So we don't have to keep redeclaring them.

If you have undeclared variables that are assigned a value, it automatically has global scope. For example, in the below example we assign value "Hello" to variable message inside a function.

Here the variable wasn't declared before it was assigned a value. So variable message is now in global scope.

It is always recommended to declare your variables before or while assigning the value. Simply assigning a value to a variable is just an assignment operation. In the above example, variable message becomes a property of window object (because it is defacto declared using var keyword, we will get to this later below).

This will also help developers easily deal with bugs since codes can be looked at in isolated pieces. It will also take care of variable naming issues since we can repeat the same variable names in different scopes.

Variables declared in global scope should be minimum. This is because global scope variables will be in the memory until application closes. Make sure any variable is only within the necessary scope. Principle of least accessibility should be practiced.

As we saw earlier, variable scoping has some differences depending on how you declare them. Although var is essentially outdated and is not recommended to be used, you should understand why.

That means any variable declared using var keyword will be available globally. This will not only flood the memory but also creates some painful bugs. Variables declared using let and const keyword are not hoisted. Hence they're block scoped (unless declared globally) which limits them to a narrow purpose.

This will conflict with variables that are already defined in the window object. For example, the name variable.

However, since let and const are not hoisted, the issue is resolved.

Love it or hate it, you cannot deny ES6 has made an average JavaScript programer's life simpler.

Scope is a way to define the accessibility of variables. JavaScript has evolved over time in accordance with the principle of least accessibility. Hence in 2015, it introduced let and const which enables block scoping.

From JavaScript's perspective, scope is a way to clearly define the execution context. It will reduce the clutter during development and execution.