For those of us born in the 90s, we all have been introduced to statistics during school. But little did we know the game-changer that statistics is going to become in the better half of the next century. This is not to say that statistics was not already a game-changer. But the rise of computing power and software has allowed statistics to be used to its full potential. Every year, the power bar actually goes up as we step into the realm we humans never hoped to be on. Perhaps our data collection capabilities have outperformed our computing capabilities. Now that’s like saying we’re back to square one. But that’s a totally different topic. For now, let’s focus on statistics and how it’s being useful to us in data science.

Let’s ask the most evident question before going forward. The easiest way to answer it is also the lamest way to do so - Google’s definition.

Statistics is the practice or science of collecting and analysing numerical data in large quantities, especially for the purpose of inferring proportions in a whole from those in a representative sample.

Statistics does include both collecting and analyzing data. In data science, these are independent carrier fields that require their own set of professional skills. These fields complement each other.

Why statistics in data science?

Hopefully, the answer is already obvious. In data science, we deal with population and samples. The population is the whole set of data we are looking to learn while a sample is a subset of the population. A typical data set in a data science project will contain millions of data points. This is far beyond the computing capability of any modern machinery. To compensate for that, we will create a sample from our data set (population). We then use statistical methods in this sample to arrive at a possible conclusion for the whole data set. Sometimes, we might not even know the original population in its entirety. Example: the entire population of a country. But we can take samples from different parts of a country and then use statistics to get an idea about the whole population.

There are two types of statistics. One is descriptive statistics while the other is inferential statistics.

Mean is just the average of all the values in the sample.

Mode is the most repeating value in the sample set. Mode represents the most popular choice among the population. The below image depicts the mean, median, and mode of a sample set of values. 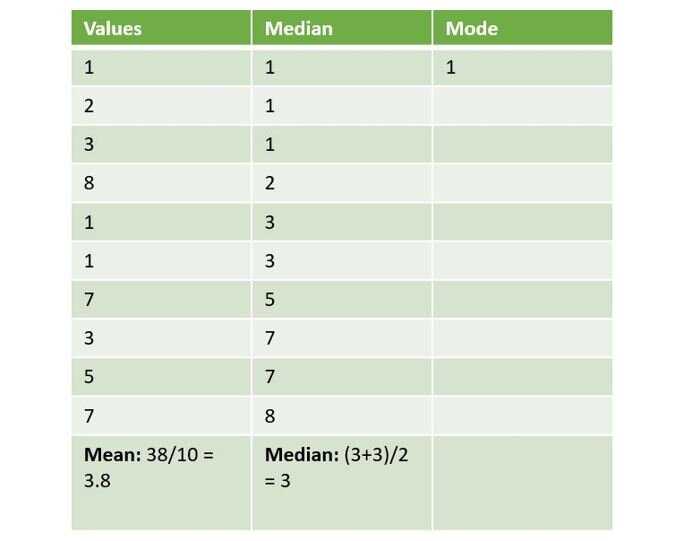 The measure of central tendency gives us the center of the data. It will give us how the typical value in our data set looks like. But it is not enough. It is also important to measure how much our data is actually dispersed from that center. Variability can be gauged using methods like Range, Interquartile range, Variance, and Standard deviation.

Range is the entire set of values something can have. The range is the difference between the maximum value and the minimum value.

When calculating the interquartile range, we first order our data set in increasing or decreasing order. Then divide our data into four quarters. Then we take the last two values in each quarter and find their mean. The difference between the value of the first quarter and the third quarter is called the interquartile range. They’re are useful to calculate midspread.

In other words, one can say we’re finding the median of the lower and upper half of the data. Then subtracting those medians. The below image depicts the range and interquartile range. 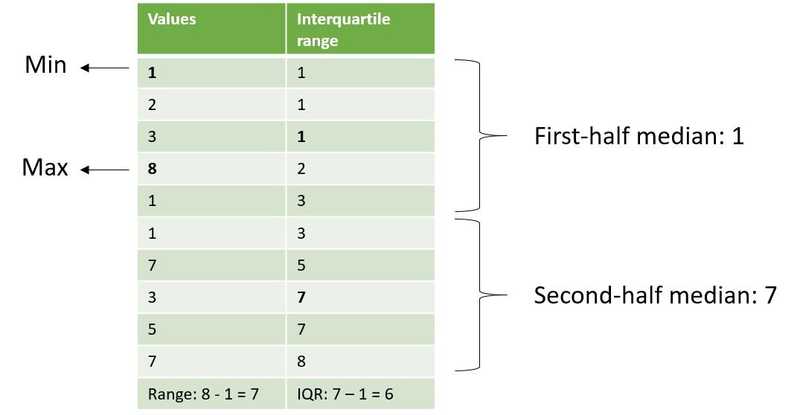 xi = the value of the one observation

x̅ = the mean value of all observations

n = the number of observations

Deviation just means the difference between a selected data point and the average value. Standard deviation can be obtained by just square rooting the variance.

n = the size of the sample

xi = each value from the sample

The below image depicts the calculation of variance and standard deviation of a sample of data. 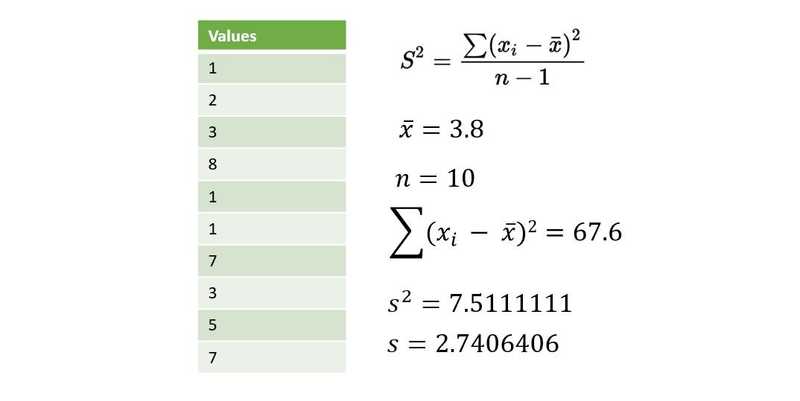 There was a time when people underestimated how simple statistics would be detrimental to our daily living. Hopefully, the increasingly mainstream nature of data science will help reduce that. Everything from all walks of life, from our phone to our car to our fridge to our AC has improved because of data science. Statistics plays a major role in data science’s upbringing. Without statistics, data science is just data and no science.