1. What is a decision tree?

A decision tree is just a flow chart like structure that helps us make decisions. Below is a simple example of a decision tree. 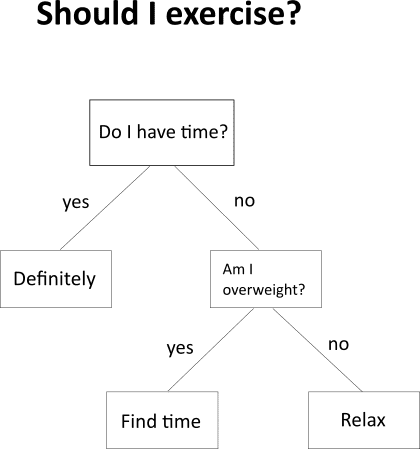 As we can see, a decision tree allows us to follow a certain path to arrive at a conclusion. While programming, the yes and no could be simple if-else conditions. We split our data into subsets based on some variable (eg: gender, age) which we can use to develop a decision tree so our program knows what to do with our data. We’ll talk more in detail down the line.

The real-world definition of the term entropy might be familiar to one. Let’s take a look at it.

A thermodynamic quantity representing the unavailability of a system's thermal energy for conversion into mechanical work, often interpreted as the degree of disorder or randomness in the system

If one doesn’t understand it or even if one does, it’s totally fine. In simple terms, entropy is the degree of disorder or randomness in the system. In data science, entropy pretty much refers to the same. The degree of randomness in a data set will indicate how impure or uncertain the data in the set is. The entropy of the whole set of data can be calculated by using the following equation.

S - Set of all instances

For those not coming from a physics/probability background, the above equation could be confusing. But do not worry. We will discuss it in-depth as we go down.

|Sj| - number of instances with j value of an attribute A

|S| - total number of instances in the dataset

v - set of distinct values of an attribute A

H(Sj) - entropy of subset of instances for attribute A

There will be some difficulty in understanding the terms and logic behind the equation. The idea is simple. We reduce the entropy of the subset having attribute A from the entropy of the whole set S. The difference will give us the amount of information we have gained. Again, one shall understand as we go down.

4. A use case for entropy and information gain

Trying to understand entropy and information gain in plain theory is a bit difficult. It is best understood via an example. Let’s look at the following problem statement. 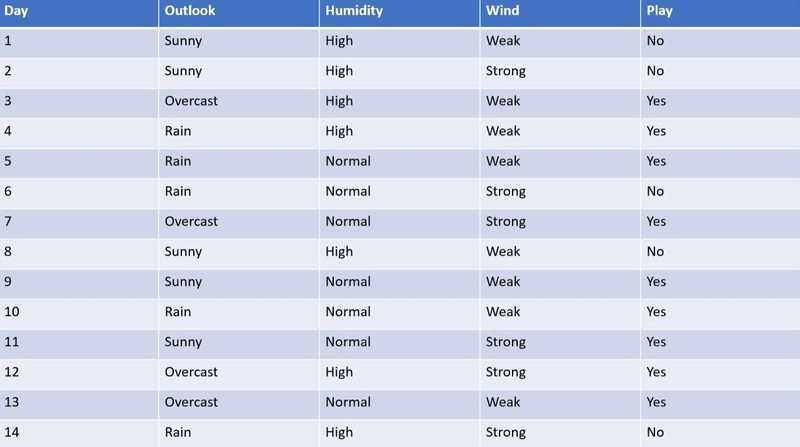 For a decision tree to be made, we first need a root variable. Because a decision tree, as already exemplified above starts with a root node. Here three variables - outlook, humidity, and wind determines the final outcome. While all three variables play an important role in the final outcome, one of them will play the most important role. Now let’s quote something we already talked about above.

...information gain indicates how much information a particular variable or feature gives us about the final outcome.

Pi is the probability of the event. There are 2 events as outcomes here, as already mentioned above. One is the event “yes” and the other is the event “no”. In a total of 14, 9 cases are Yes and the rest 5 cases, the outcome is No.

Now what is remaining is only applying these values to the above equation.

Now it is time to calculate the IG of each variable. Let’s recap the formula once again.

Out of 4 instances which is Overcast, all 4 are playable. Hence 4/4.

Here the variable Outlook has the highest gain (0.247) hence should be taken as the root variable. If we just scan over the table above, it should be obvious that the outlook variable has the most effect on the final outcome. However, when we are dealing with actual data science projects, the data will be big and complex. Hence it is easier to find the gain of variables and use the variable with the highest gain as the root.

Now that we have our root variable, we can finally make our decision tree. 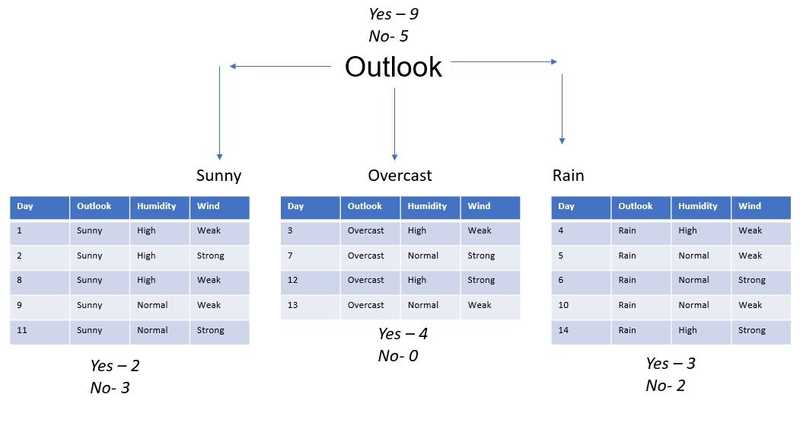 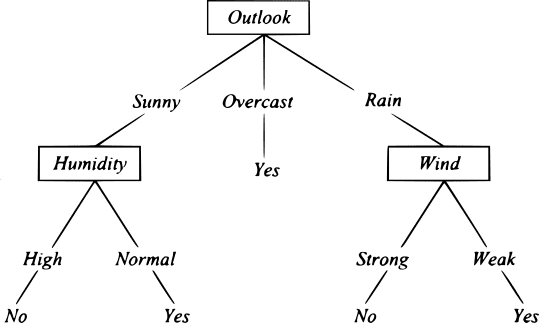 Since the outlook variable has the most importance to the final outcome, it makes sense to start our decision tree with outlook. This is a very simple example. But when we’re going to be dealing with huge and complex data, having the most consequential variable as our root is important for efficiency. Just taking a look at the decision tree, we can see that if the value of the variable outlook is overcast, we don’t even have to check other variable values. The final outcome is already yes. One can guess how this improves the efficiency of our program. This is especially true when writing decision tree algorithms for machine learning. We have to follow a pattern in which the most important variable is checked first and the least important one is checked last. For that, we must calculate the information gain of all the variables and write our algorithm accordingly.