In a previous post, we talked about statistics in general and descriptive statistics in detail. It will be better if one read that post before reading this. But for a recap, here is what we said.

In this post, we will deep dive into inferential statistics. But, before we get there, we need to revise some school time math.

Anyone passing through 8th grade already knows what probability is, but for the sake of completeness, let’s quote the definition from Google.

Probability is the extent to which an event is likely to occur, measured by the ratio of the favourable cases to the whole number of cases possible.

Points to be noted:

When we’re dealing with a single isolated event with fixed outcomes, it is easy to calculate probability. But when there is a whole set of events, it becomes tiresome to calculate the probabilities individually. The best way to overcome this is to define a probability distribution function. We can pass outcomes as values to the function and it will give us the probability of the outcome.

This is often a confusing term for people learning probability for the first time. But really, it’s simple. As we already mentioned above, an experiment with multiple outcomes is called a random experiment. A set of all the outcomes of a random experiment is called sample space. A random variable takes the value inside the sample space whose probability we would like to calculate. In other terms, a random variable maps the values inside the sample space. It is usually denoted by X.

X can have each of these values. Probability is P(X=x) or just P(X). Here P(X) is the probability function.

Notice how here X is having discrete values from 1 to 6. Hence, X is called a discrete random variable.

In data science, we don’t have the luxury of just dealing with experiments having discrete outcomes. For example, we are required to create an algorithm that will measure the amount of rainfall. Normally we hear predictions like “there will be 2 cm of rain tomorrow”. But let us be clear, there is nothing called 2 cm of rain. Even if a milligram of additional water comes down, our calculation is wrong. So saying that there is exactly 2 cm of rain is predicting something with zero or near-zero probability. And by logic, who would predict an outcome that has zero or near-zero probability? Normally, events with the highest probability are used as the prediction.

When they say there will be 2 cm of rain tomorrow, what they actually mean is that there will be about 2 cm of rain. The amount of rain could be 1.9999 or 2.0001. Hence there is a range in between where the amount of rain is highly probable. The number of values between this range is infinite. We can have any number of values between 1.9999 and 2.0001 which will all come under the range.

Here X stores a value that continues from 1.9999 to 2.0001 hence the term continuous random variable. 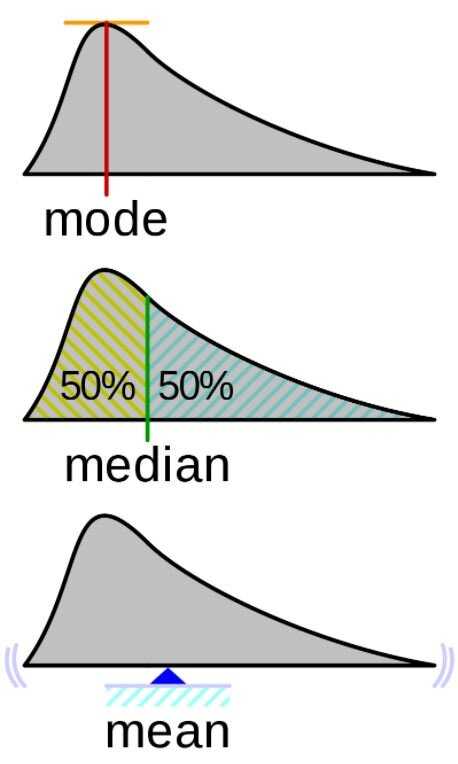 One must have noticed how mode (the most repeated value in our sample set) has the highest probability. Logically, it is correct. We can divide PDF by the median (central value of the set) and get equal probability on either side.

The entire area under the curve will be 1 as the sum of all probabilities will equal 1.

A distribution is termed “normal” when the values near the mean are more probable than values away from the mean. A sample data set from a natural phenomenon would ideally imitate a normal distribution.

The idea behind the curve is that the data near the mean will occur more frequently than data away from the mean. The curve thus generated is called a bell curve. This is very important when the distribution of the random variable (as often happens in real-world scenarios) is not known. It will make more sense once we cover the central limit theorem.

Marginal probability is the probability of an event occurring irrespective of the outcome of another variable.

Conditional probability is the probability of an event occurring after another event has already occurred.

P(A | B) - Probability of A given B has already happened

P(B | A) - Probability of B given A has already happened

Point estimation is a method to find a single value from a sample that would serve as the best estimate for an unknown population parameter. We already discussed an example relating to point estimation when discussing the central limit theorem. Let’s quote from above.

Ways to calculate the estimate

If we were asked how much time it takes to travel to school, in a point estimation, we’ll answer an exact time like “12 minutes”. But if we’re using interval estimation, the answer will be a range, like between 10 and 15 minutes. Here 10 is the lower confidence limit and 15 is the upper confidence limit.

Confidence interval is a measure of our confidence that the mean of our population is contained in the interval estimate. It gives us an idea about the amount of uncertainty associated with a given estimate.

We can set a confidence level before we arrive at our estimate. Typically this is either 95% or 99%.

n - Size of the sample

The value of the confidence interval is taken from the Z-score table.

When we keep repeating an experiment, the probability of our desired outcome increases. That is just by the virtue of conducting more experiments. When sufficiently enough experiments are conducted and we still don’t have the desired outcome, we know the sample lacked the qualities to be representative of the whole population. This is called hypothesis testing.