Vectors are a useful way of representing data in python. The better way to create vectors is by using the popular NumPy library. It also includes all the vector operations like addition, subtractions, dot product, etc. However, we will be using inbuilt methods to create vectors in this article. Python has no dedicated module or a method for creating vectors, so we will be using the type alias feature to accomplish it. This also means we will have to write all the functions for addition, subtraction, dot product, finding magnitude, and distance (between two vectors) ourselves. Using this method will be slow from a computational standpoint. This is only to understand the concept level thinking that goes into creating vectors.

A vector is a quantity that has a tail (starting point), a head (ending point), a direction, and magnitude. A direction and magnitude are enough to locate their path but having a tail and head can help us mark them at the exact location. One can perform operations like vector addition, subtraction, dot product, etc to arrive at necessary results. The below image is a simple illustration of a vector. 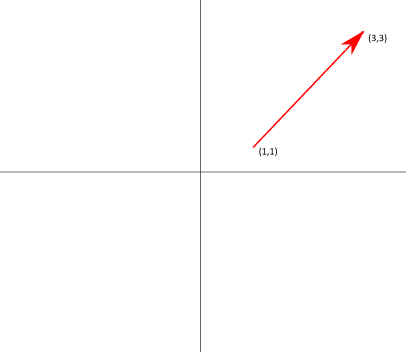 The above vector is in a 2D plane. We can however represent vectors in any number of dimensions, except 1D.

Representing our data in vector format

One might be thinking what is the use of representing our data in vector format. The use is simple, with vector we can conduct vector operations. We can also multiply them with numbers (scalars). For example, if a person is defined by his height, weight, and age then we can represent him with a 3D vector [height, weight, age].

This vector will be standard for representing any person. All the persons will fit inside the vector space. We will be utilizing lists to write vectors in python. We will be defining our own functions to conduct vector operations. Before going forward, however, we need to learn two features of python which we will be using in this tutorial. They are type alias and assert keyword.

Python is a dynamically typed programming language. This means we don’t need to specify the type of our variables, arguments, etc. However, we can (since python 3.5) provide type but only as a hint. It will never be enforced by python however we can use third-party checkers like mypy to check if our code is correct. This is useful if we want to be careful about the types we use in our code. Here is a simple example.

In the above code, we are hinting that the argument of the function greeting should be a string. However, it’s not enforced by python. We can still pass any data type we want. It is best used with third-party checkers like mypy. This has many pros including telling our co-developers much-needed information. This is called type hinting. Talking in detail about typing in python is beyond the scope of this article but one can read the official documentation here.

From now onwards, we can type-hint vectors using Vector. Third-party checkers will also take note of it.

The assert keyword is used to test our code. It is used for debugging. This is best explained through an example.

Here, we have defined a function addition that takes in two values num1 and num2. It returns num1 + num2. We can use assert to check if our function is working as intended. We know the sum of 1 and 2 should be 3. When we run the code, the assert keyword runs the addition function with 1 and 2 as arguments. Then it will check if the returned value is equal to 3. If it is, the code will work just fine. If it isn’t, we will get an assertion error “not working”. This is a useful way of testing our code. We will be using assert in this tutorial because we want to be sure the functions we write are correct. It will be otherwise hard to detect from the returned value.

We already see how we used type alias to create the vector type. Now let’s actually create a vector.

Was that too simple? Well, that’s all it takes. We have defined a list of floats as a vector. So, we have successfully created our first vector. What we really need to do now is creating all the functions for this vector so we can actually do vector operations. Let’s start with vector addition.

While adding two or more vectors, we add the corresponding elements. If the vectors have uneven length, addition is not possible.

See how we used Vector as a type hint while defining our function. We used assert to check if our vectors are of the same length. The zip() creates a new list containing tuples of values having the same index in list/vector v and w. Each tuple in this new list is accessed and their values are summed. One can read about list comprehensions in our pythonic programming tutorial.

The code will be similar to vector addition. Instead of adding each element, we subtract each element.

Scalar multiplication can be achieved by simply multiplying the vector with a number. It is a simple function.

For finding the dot product of two vectors, we find the sum of the products of each corresponding elements. The vectors must be of equal length.

The sum() accepts a list of values and returns their sum. The list comprehension v_i * w_i for v_i, w_i in zip(v, w) creates a list of the products of each corresponding elements.

Now we need to find the square root to compute magnitude.

Finding the distance between two vectors

In this tutorial, we briefly learned typing, type alias, and assert feature. We learned to utilize them for creating vectors in python. We also created functions for calculating vector addition, subtraction, scalar multiplication, dot product, magnitude, and for finding distance between two vectors.

We recommend using a third-party library like NumPy in your actual data science project. The library has built-in methods for defining vectors and conducting operations on them. However, we hope this tutorial helped you gain some clarity on behind the scenes working of vectors and vector operations.